On 5 January 2018, the Convention on the Measurement of Inland Waterways Vessels drawn up in Geneva in 1966 was published in the Journal of Laws of the Republic of Poland.

The Convention ratified by the President of the Republic of Poland Andrzej Duda leads to the adoption by Poland of newer, more detailed and adequate standards for measurements of inland waterway vessels that are adequate to contemporary conditions. This will allow equating the statute of Polish vessels by recognizing their measurement certificates with similar documents issued by the States Parties to the newer Convention.

The unification of the method of measuring ships within the states of the parties to the Convention allows for a reliable approach to inland waterway vessels. Their dimensions are taken into account, which translates into the standardization of technical parameters of inland waterways – including clearances under bridges, as well as the unification of rolling stock, which facilitates the free flow of workers in inland navigation.

The convention is available at this address:

The formal establishment of the European IWT platform is a fact.

Brussels, January 1, 2018. EBU and ESO are proud to announce the establishment of the European IWT platform. This platform is a vehicle to strengthen the international organisations representing inland waterway transport at European level.
This platform will be able to increase the potential of the sector in the earlier mentioned fields and in the specific areas vis à vis the European and international institutions. The increased expertise is also to be considered as a catalyst to elaborate effective strategies in the key areas of the future, such as “Greening and Innovation” and “Social and Education. EBU and ESO see this a major milestone in the further professionalisation of the IWT lobby at European level.

The platform is a cooperation of the two European associations representing IWT in which they aim to bring in their expertise in all relevant aspects and support European and international decision makers in the various fields. The platform will be based in Brussels, close to the heart of European IWT policy making.

Executive summary
A few elements confirm the improving economic conditions in Europe: exports keep rising, EU industrial production increased by 1.9% in Q1 2017 compared to Q1 2016, and building sector activity is
progressing in most of the inland waterway transport (IWT) countries in Europe. Nevertheless, the IWT
volumes decreased during the first quarter of 2017.
Although the situation had recovered compared to the end of 2016, the total transport performance on the Traditional Rhine decreased by 12% in Q1 2017 compared to Q1 2016, and on the Danube the reduction was 22%. This can mainly be explained by low water conditions at the beginning of 2017, and by ice periods that strongly affected Danube navigation at the beginning of the year. However, the evolution is not homogenous all over Europe.
In particular, inland navigation goods transport increased in Belgium at the beginning of 2017, and this increase was strongly supported by container transport that continued its strong upward trend in Belgium, with an increase of almost 20%. 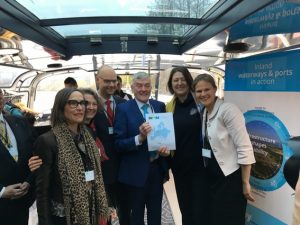 “Fair play and a level playing field are the core demands of the sector, and these can only be achieved through European legislation,” says Christiaan Van Lancker, President ESO.

Today, the Plenary of the European Parliament adopted the Commission’s proposal, thereby taking a significant step towards a European labour market for IWT professionals as well as harmonised working and living conditions in this international transport sector.
The European Barge Union (EBU), the European Skippers Organisation (ESO) and the European Transport Workers’ Federation (ETF) express their satisfaction on the adoption of the Directive on recognition of professional qualifications for European Inland Waterways Transport (IWT).

Strasbourg CCNR – The European Committee for drawing up Standards in the field of Inland Navigation (CESNI) met in Strasbourg on Thursday 18 October 2017; for the last time the meeting was chaired by Mr. Max Nilles, the representative of the Grand Duchy of Luxembourg.
Taking part in the discussions were twelve Member States, as well as the Sava Commission, the UNECE (United Nations Economic Commission for Europe), and several organisations accredited with the CESNI. The Republic of Ukraine was officially recognised as an Observer State at this meeting.
At this last meeting of 2017, the Committee decided to grant the Republic of Ukraine Observer State
status. The Committee also confirmed the setting up of a temporary working group for electronic systems aboard inland navigation vessels.

This meeting was also the opportunity for honouring the Committee’s 2016-2017 Presidency, provided
by the Luxembourg representative, Mr. Max Nilles.
The 2018-2019 Presidency will be provided by Mrs. Lucia Luijten, represetative for the Netherlands.

Standards for professional qualifications
Concerning the standards for competencies, the working group on professional qualifications accepted the proposals of the corresponding non-permanent working group for CESNI standards.
Work on drawing up CESNI standards regarding the practical examinations for boatmaster, the radar
certificate, passenger navigation and LNG expert is still in progress. Initial drafts are to be submitted to the working group in November next.
Last September the criteria for the medical fitness of crew members were discussed in detail by the working group. As for the competencies’ standards, a final consideration within the working group and the draft which will be forwarded to the committee are anticipated for the November meeting.
The expert group for simulator standards, set up by CESNI, drafted a proposal for technical requirements and technical test procedures for vessel handling simulators, which the working group can examine in November this year.

For the second year, the Central Commission for the Navigation of the Rhine (CCNR) publishes its annual Market Observation report on inland navigation in Europe, in cooperation with the European Commission.
This report, the outcome of close collaboration between the two institutions, provides an exhaustive overview of the market situation and of developments in European inland navigation during 2016.
Both Mrs Bulc, European Commissioner for Mobility and Transport, and Mr Georges, Secretary General of the CCNR, wrote a foreword, illustrating the publication’s resolutely European dimension.

Short analysis
The analysis of the development of transport volumes on major European waterways and in the principal European inland ports is a central component of the annual report. In 2016, river transport represented goods transportation of almost 145 billion tonne kilometres, with an increasing important concentration within the Rhineland countries.
The publication takes a particularly close look at each transport segment, in particular containers. Container transport increased by 4.6% throughout the European Union to reach 15 billion tonne kilometres.
Passenger transport, in particular the river cruise segment, also continued its upward trajectory in 2016: the 335 cruise vessels plying the Rhine, Danube , Seine, Elbe, the Rhone and other European Union rivers carried a total of 1.36 million people.

CCNR published recently a stability guide for container transport in inland navigation. To achieve this ready-to-use practical guide ESO, EBU, Aquapol and CCNR did work closely together.  For the benefit of all stakeholders on board and ashore it is decided to publish this guide to good practice in container barging.
The guide illustrates in an easy-way the basic principles of stability and shows real-life (tried and tested) examples influencing stability in a positive way.

The target groups for this guide include as well the inland container navigation boatmasters as the crew members responsible for the stability and safety of their vessel in every day situations.
At the same time, this guide is also helpful for employees in all sectors closely associated with IWT, e.g. for employees of relevant authorities, terminal staff, forwarders, etc.

You can download the guide by clicking one of the flags above.

While calling the successful candidates of the final examinations, teacher Tom van den Berg and director Arjen Mintjes* of the Maritime Academy Harlingen were signalled by the Coast Guard to rescue a sinking French sailing yacht at the Pollendam** with other colleagues of the KNRM** Harlingen.
The  successful candidates had to wait a little longer for their results, but the French sailor was brought into Harlingen safe and sound thanks to this fast KNRM action. ‘

*) Mr Arjen Mintjes is secretary of EDINNA, the European educational association of schools and institutes for inland waterway navigation. 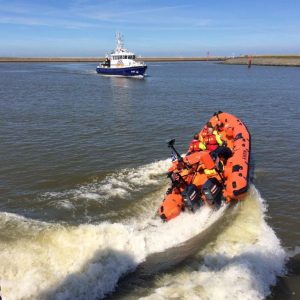 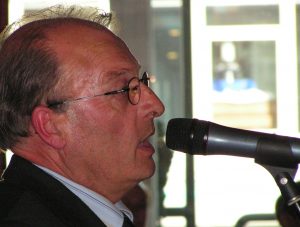